The Anglican Diocese of the Windward Islands is one of eight dioceses within the Province of the West Indies. The current bishop is Leopold Friday.

The diocese was established on 8 November 1877 from the islands of St Vincent and the Grenadines, Grenada and Tobago. Tobago transferred to the Diocese of Trinidad in 1889 when those two islands were joined together politically and St Lucia joined the Windward Islands diocese in 1899.

The new diocese shared a bishop with Barbados until 1927, when the retiring Bishop of Barbados, Alfred Berkeley, was elected as the first full-time Bishop of the Windward Isles.

The Cathedral Church of the see is St George’s Cathedral in Kingstown, St Vincent. 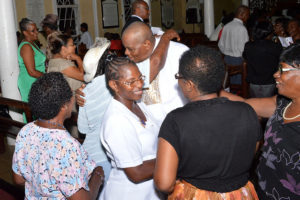 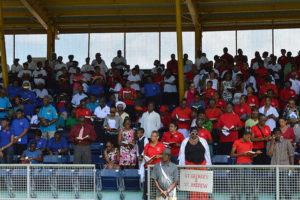 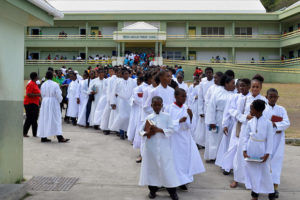 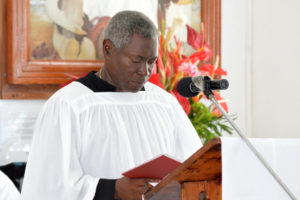 The nineteenth century was a turbulent period for the peoples of the Caribbean. The early part of the century was marked by a series of attempts by the slave population of the region to secure their freedom. It was also in the early part of the century that the most important development of that period occurred. The institution of slavery was abolished. The formation of the Diocese of the Windward Islands occurred less than fifty years after the abolition of slavery.

Alfred Caldecott, in his history on the Church in the West Indies, claims that the formation of the Diocese of the Windward Islands was related to certain political events of the time. In 1876, an attempt was made by Britain to federate the smaller territories of the eastern Caribbean. This attempt is seen by some historians as a move by the British to reduce the cost of administering the islands and at the same time to gain firmer control of them. The idea of a Federation was resisted by the Barbadian plantocracy, and the plans for a federation were shelved. Britain then proceeded to group St. Vincent, Grenada and their dependencies, along with Tobago, into the Windward Island government.

This new political arrangement carried with it some ecclesiastical implications. The Diocese of Barbados, under whose jurisdiction the islands of the new government fell, was the established church of that island, with the stipends of clergy and other church expenses being met by the government of Barbados. Some of these benefits could have been extended to all the islands that were politically attached to Barbados. Now that these islands were being formed into an autonomous political unit, Bishop Mitchinson, who was Bishop of Barbados at that time, thought it best that the islands, which comprised the new government, be formed into a separate Diocese. He advocated that the islands of St. Vincent, Grenada and their dependencies, along with Tobago, be formed into the Diocese of the Windward Islands. The Church Councils of the individual islands as well as Provincial Synod gave approval to Bishop Mitchinson’s proposal.

The islands were separated by Royal Warrant from the Diocese of Barbados and formed into a separate Diocese under the style of the Windward Islands. The instrument of separation, which bears the seal of the Most Rev. Archibald Campbell, Archbishop of Canterbury, is dated 8th November 1877. In 1889 Tobago was placed politically with Trinidad and passed into that Diocese. St. Lucia was incorporated into the Windward Islands in 1899.

Whereas the Diocese of the Windward Islands has been administered from its inception by the Bishop of Barbados with permission of government of Barbados, and whereas it appears from the records that it was the original intention that the said Diocese should be administered by its own Bishop so soon as provision therefore could be made financially, and whereas at a meeting of the Synod of the said Diocese held at the Cathedral in St. Vincent on the 20th April 1926, there was a unanimous expression of opinion brought about by the impending retirement of the present Bishop of Barbaods, that the time had arrived for making an effort for the carrying out of the original intention, and whereas it is the desire of the said Synod that the Provincial Synod be humbly approached at the earliest opportunity with the view of obtaining sympathetic assistance and advice in the direction indicated, be it therefore resolved that the Synod places on record its grateful appreciation of past service rendered to the Diocese by the See and government of Barbados, and humbly requests Provincial Synod to convey the gratitude of this Diocese to the See and government aforesaid, and in so doing, to endeavour to obtain some assurance, that should it be found impracticable either to make or to continue to make the necessary provisions for the maintenance of its own Bishop, the Bishop of Barbados to resume the administration of the said Diocese.

On March 19th, 1927, the Synod of the Windward Islands, comprising nine clergy and fourteen laymen, elected Bishop Alfred Berkeley, the retired Bishop of Barbados, as Bishop of the Windward islands. Bishop Berkeley held the See in conjunction with the rectorship of St. George’s Cathedral.
The last fifty years have seen the Diocese going from strength to strength. During these years, some twenty-four persons from the Diocese have offered themselves for the priesthood. Among them is the present Bishop of the Diocese, the Rt. Rev. G.C.M. Woodroffe. Many others have held responsible positions both in the Diocese and abroad.

1899 – St. Lucia incorporated into the Diocese.

1920 – The Cathedral celebrated 100th anniversary of consecration as a parish church.

1927 – The Bishop of Barbados stopped administering the diocese, and for the first time in its history the Diocese of the Windward Islands is administered separately by its own Bishop.

1943 – The Church of Holy Trinity, Castries, celebrated its 100th anniversary of consecration.

1947 – The Mothers’ Union organization was introduced into the Diocese.

1962 – The first consecration took place in the Diocese. Archdeacon Harold Piggott was consecrated Bishop of the Windward Islands.

1964 – Three more Secondary schools started. These are the Bishop’s College of Kingstown, Georgetown and Carriacou.

1969 – The Archbishop of Canterbury visited the Diocese.

1970 – The Cathedral celebrated its 150th anniversary of consecration as a parish church.

As disciples of Our Lord and Saviour Jesus Christ of the church in the Province of the West Indies our vision is to be a Church which is Evangelistic and Mission Oriented, Faithful in its Stewardship and Contextually Congenial. Where justice and Compassion are experienced, and people from all walks of life are welcomed and ministered to. A Church which provides sound and informed teaching, Guidance, Counsel and Direction to all, and embraces and fosters relationships with Individuals, Churches, groups and Organisations, local, regional and international for the pursuit of the common good.

We are committed to the great Commission given by Our Lord and Saviour Jesus Christ in Matthew 28:18-20, to proclaim the good news and to participate in God’s mission to the world; we uphold Christian Thought, Belief, Tradition and Practice within the Anglican Communion, and are a Church which endeavours to deepen discipleship and to foster caring, competent and responsible citizens who take their Christian and Social Responsibility seriously.