What do Anglicans believe?

Anglicans believe that there is only one God, but there are three elements to this one God: God the Father, God the Son, God the Holy Spirit; that human beings’ decision to reject this eternal God and live according to their own standards (sin) causes as relational breakdown between them; that God the son, Jesus Christ, lived and died to give people a model and a way to be reconciled with God.

Anglicans consider the Bible to be fundamental to life as a Christian and believe that “the Scriptures contain all things necessary for salvation”.

Anglicans believe that the Christian life involves regular praise and prayer, both private and public, and that Christians must practice what they preach and pray both on Sundays (the day when Anglicans normally gather for worship) and every day, as they seek to live out their worship. 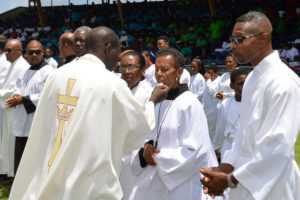 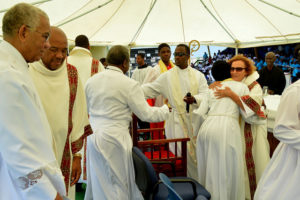 Anglicans believe that people become members of God’s Church through Baptism, and all Christians celebrate Holy Communion (also known as Eucharist) as a shared ‘meal’ (of bread/wafer and wine) which they eat together in Jesus’ name.

Anglicans accept the major Creeds as expressing their Christian faith: The Apostles’’ Creed is the statement of faith used in Baptism and Morning and evening Pray, while the Nicene Creed is prayed in the Service of Holy Communion. (These can be found in any Anglican prayer book.) Anglicans summarize their basic beliefs in The Catechism (an old word, meaning “what is to be taught”). [Learn more about these foundations of faith here]

An important caveat about this question is that if you ask three Anglicans about doctrine you’ll get five different answers! Anglicanism’s greatest strength – its willingness to tolerate a wide variety in Anglican faith and lifestyle – is also the thing that provokes the most debate among its practitioners.

Anglicans, however, do agree that their beliefs and practices, their authority, derive from an integration of Scripture (The Holy Bible), Reason (the intellect and the experience of God) and Tradition (the practices and beliefs of the historical church). This ‘three-legged stool’ is said to demonstrate a ‘balance’ in the Anglican approach to faith contrasting it with Roman Catholic and the Protestant doctrines. The term via media when used in reference to the Anglican tradition generally refers to the idea that Anglicanism represents a middle way between

A Building with Foundations

Anglicans have a number of ways of deciding what they believe, of defining the content of their doctrine. Like a tower with strong foundations, Anglicans doctrine is built upon Scripture, the ancient creeds, distinctive ways of worship, doctrinal statements, important texts, and continuing discussion.

Thomas Cramner wrote and compiled the first two editions of the Book of Common Prayer, a complete liturgy for the English Church. With the assistance of several Continental reformers to whom have gave refuge, he changed doctrine in areas such as the Eucharist, clerical celibacy, the role of images in places of worship, and the veneration of saints. Cranmer promulgated the new doctrines through the Prayer Book, the Homilies and other publications.

The Bible is acknowledged as the ‘ground’ on which any expression of Christian faith must be founded.

Anglicans, like many other Christians, formally profess their faith in the words of the historic Christian creeds, which were formulated in the early centuries of the Christian Church. (The word ‘creed’ comes from the Latin ‘credo’ = ‘I believe’)

The Apostles’ Creed and the Nicene Creed are used very regularly in Anglican worship; the Anthanasian Creed is used in worship less often, but is considered to set out the classic understanding of key Christian doctrines about the nature of God and the person of Jesus Christ.