The Province of the West Indies

The Anglican Diocese of the Windward Islands is one of eight dioceses within the Province of the West Indies. The current bishop is Leopold Friday.

The diocese was established on 8 November 1877 from the islands of St Vincent and the Grenadines, Grenada and Tobago. Tobago transferred to the Diocese of Trinidad in 1889 when those two islands were joined together politically and St Lucia joined the Windward Islands diocese in 1899.

The new diocese shared a bishop with Barbados until 1927, when the retiring Bishop of Barbados, Alfred Berkeley, was elected as the first full-time Bishop of the Windward Isles.

The Cathedral Church of the see is St George’s Cathedral in Kingstown, St Vincent. 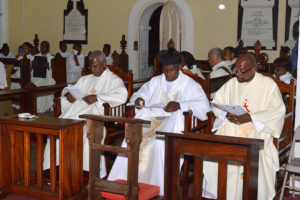 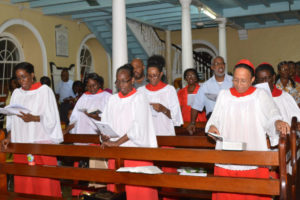 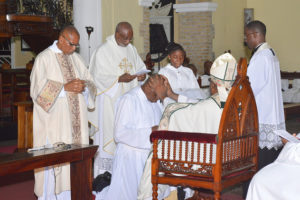 The Anglican Church arrived in the West Indies with the original English settlers in the early part of the 17th century, the clergy for the most part being state chaplains to the English officials and planters. The Society for the Propagation of the Gospel in foreign parts (S.P.G.) sent out men to maintain a supply of clergy to the colonies, but some sons of settlers traveled back to England for ordination. The ecclesiastical appointment of the clergy lay in the hands of the colonial Governors and was linked with appointments to civil posts, an arrangement which served to supplement their slender stipends.

Outreach to the slave population, among whom missionary work was first undertaken by the United Brethren (Moravians) and Methodists, began towards the end of the 18th century. The Bishop of London (Dr. Beilby Porteus) under whose jurisdiction the Anglican work in foreign lands fell, was instrumental in forming “The Incorporated Society for the Conversion, Religious Instruction and Education of the Negroes”.
The Society (S.P.G.) sent out its first four Catechists and teachers at the end of the 18th century, including one to St. Kitts in 1796 and another to Antigua in 1799. The Society for the Promotion of Christian Knowledge (S.P.C.K.) concentrated on the provision of schools and the publication of Bibles, Prayer Books and religious literature.

It should be noted that by his Will made as far back as 1698 in Antigua, Christopher Codrington had left provision for the training of missionaries/teachers to lead the slave population to “milder manners, gentler ways” which led to the establishment of Codrington College, the Provincial Theological Seminary. In 1797 legislation was enacted in Barbados and Jamaica requiring the clergy to devote time on Sundays to-the instruction of the slaves.

The first two Anglican Dioceses were established in the West Indies in 1824: The Diocese of Jamaica, which included the Bahamas and the settlements in the Bay of Honduras; and the Diocese of Barbados, including the Leeward and Windward Islands, Trinidad and Guiana. The Bishops were, respectively, Dr. Christopher Lipscombe and Dr. William Coleridge. This gave a decided impetus to the work of the Church and both bishops set about rectifying the discriminatory practices, which they found in the ministrations of the Church to whites and blacks.

The abolition of slavery ushered in a new era and the Churches were caught up in the task of reconstruction. At Emancipation the British Government provided a Negro Education Grant of £30,000 annually to be used to further the missionary work among the freed slaves, and this was administered largely through the Churches in programmes of education and social welfare. Around this period the Church Missionary Society (C.M.S.) turned its attention to the West Indies. Mention might here be made of Dr. Richard Rawle, Principal of Codrington College and later Bishop of Trinidad, who worked untiringly for the betterment and education f the ex-slaves in Barbados and subsequently in other islands through the Teachers’ Training College, which bore his name.

Other Dioceses were formed in the West Indies in the 19th century. Antigua and Guiana, 1842; Nassau and the Bahamas, 1861; Trinidad and Tobago, 1872; Windward Islands, 1878; Honduras (now Belize), 1891. The Province of the West Indies came into being in 1883. In 1895 the provincial Synod, meeting in Guiana, decided that the Primate of the Province be designated Archbishop but the formal adoption and promulgation of the title was deferred until the next Lambeth Conference (1897).

The Diocese of Venezuela was founded in 1975 and remained part of the Province of the W.I. until 1980.

Except for Barbados, the Anglican Church in the various dioceses was dis-established in keeping with British Imperial policy promulgated by Parliament in 1870. Dis-establishment in Barbados was finally completed in 1969.

The operation of the Province has been a matter of concern for many years. Bishop Edward Hutson of Antigua, later to become Archbishop of the West Indies, reported to his Diocesan Synod in1912 that a memorandum had been submitted to the Archbishop by certain of the Clergy and Laity of the Province advocating that the Archbishopric be attached to the See of Jamaica, and at the Provincial Synod held in Guiana in 1949 the Archbishop referred to the question of a fixed Primatial See “which had been discussed in 1946”.

A Provincial Office set up on an experimental basis on the premises of S.P.G. in London was discontinued in March 1949 and instead it was proposed to set up a West Indian Provincial Committee in England, consisting of two representatives of each of the Diocesan Associations in that country. The Provincial Synod, meeting in Trinidad in 1972, passed a resolution calling for the establishment of the Provincial Secretariat in the Diocese of the Archbishop. The 1979 Partners-in-Mission Consultation of the Province held in Jamaica identified among its priorities “the need for a thorough examination of the existing structures with a view towards the creation of appropriate structures to facilitate mission both as a Province and within the Province”. The Synod appointed a Committee to undertake this examination. A Special Synod was called in 1981 in St. Vincent to receive and consider the Committee’s report and recommendations. The Synod referred these to the Dioceses for their views.

The character of the Church in the West Indies as a mission field of the English Church lasted well into the present century. Over the centuries men and money have been sent out to carry on the work while, in the meantime, with the establishment of Codrington College in Barbados and seminaries in Jamaica, the cadre of local clergy has steadily grown. Even so the Episcopacy and higher echelons of the clergy were virtually reserved for the English personnel. But with the development of truly autonomous Provinces in the Anglican Communion throughout the world, the picture has changed. N this Centenary year, all the CPWI Bishops are West Indians. However, a strong relationship between the Dioceses and S.P.G. has been maintained, as the Society’s support has been indispensable to their operation.

Companion Dioceses relationships have also been developed between CPWI and Dioceses in the Episcoopal Church of America and support has been forthcoming from the Anglican Church of Canada. The Anglican Consultative Council’s Partners-in-Mission Process introduced in 1973 has strengthened these ties, and another development was the formation in 1965 of the Anglican Regional Council of North America and the Caribbean (ACNAC) which has brought together representatives of the Anglican Church of Canada, the Episcopal Church of the USA, CPWI and the Dioceses of Cuba and Bermuda for Conferences, etc.
Oscar Bird