To: Clergy and People From: The Bishop 1st September, 2017 Greetings! The St.George’s Cathedral 197th Anniversary The St.George’s Cathedral, Kingstown, St.Vincent and the Grenadines will be celebrating its 197th Anniversary of Its consecration and dedication on Wednesday 6th September, 2017. In 1780, the first St. George’s Church in Kingstown was destroyed by hurricane along with “every […]

To: Clergy and People
From: The Bishop
1st September, 2017

The St.George’s Cathedral, Kingstown, St.Vincent and the Grenadines will be celebrating its 197th Anniversary of Its consecration and dedication on Wednesday 6th September, 2017.

In 1780, the first St. George’s Church in Kingstown was destroyed by hurricane along with “every building in St. Vincent.” Because of this devastation, the rebuilding of the Church took a long time, and it was not until 1820 that it was ready for consecration. A church cannot be consecrated until it is free from debt.

On the 26th August 1820, a Vincentian born priest,the Rev. Lansdown Guilding, became the Rector of the United Parishes of St. George and St. Andrew vacated by the death of his father the Rev. John Guilding in 1818 and the resignation of the Rev. William Aubray Phillips.

On Wednesday 6th September 1820, the completed Church of St. George now free from debt, was consecrated to the glory of God. A diarest of the period writes: “The Southern Regiment of Militia assembled at the Court House,then marched to the Church yard,where they were drawn up until the arrival of the Governor,who was received on his arrival about 11a.m. by a double guard of honour composed of the flank companies of His Majesty’s 9th Regiment and the Southern Regiment of Militia ranged on the right and left of the Avenue leading from the street to the Church. His Excellency was accompanied by Lady Brisbane, members of the Council and the Assembly. After they had entered the sacred building now happily devoted to the worship of the Supreme Being,the service of the day, including the form of consecration was conducted.” An appropriate sermon was preached by the Rev. Lansdown Guilding from Leviticus Chapter 26, verse 2.Music for the service was rendered by the band of the 9th Regiment.

Three bells were sent from liverpool by Mr. N.B. Cooper for which the Governor paid his attorney £226.2s.11d sterling. The pulpit and Reading Desk arrived from England in December.

On the 20th May 1880, the corner stone of the Chancel was laid by the Administrator and in 1887 the Chancel and Transcepts were consecrated by Dr.Bree, Bishop of the Diocese.

The building is mainly of lava stone, in simple Georgian style standing on some four acres of ground. The interior is very striking with a magnificent Norman arch leading form the Nave into the spacious crossing of the Transcepts, a flight of stairs lead the eye through the Chancel to the high altar which stands truly high above the floor of the nave.

In 1920 when the Cathedral celebrated its 100th Anniversary of consecration as the parish church,the day was declared a public holiday by the Government, and all the dignitaries of the land with thousands of people joined in giving thanks to Almighty God for having established His One, Holy, Catholic and Apostolic Church in their midst, and for the beautiful Temple dedicated to this Honour. Everyday of the Octave there was a “choral Eucharist” and Evensong with a Special preacher. How much indeed was the need for thanksgiving for the Church as the Bride of Christ is the servant of the people of God and as such has always been concerned not only with the spiritual well-being of the people but also with their physical and mental health. 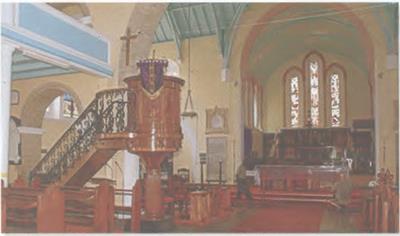 The Cathedral is a special place to many people: a House of Prayer, place of History, a Sanctuary, a place of Solace where we experience the comfort of God’s Holy Presence.

Now, the Cathedral needs your help. It has fallen into a state of disrepair that requires urgent attention. We have to restore it, and we have to do so now. Now, more than ever, our Church needs your help.

Whatever help you are disposed to give to this charitable effort, it shall be thankfully received and faithfully applied to the restoration of our Cathedral.

The Cathedral is the Mother Church of the Diocese. let us not forget the many persons whose lives have been blessed and transformed through worship and the ministry of those serving at the Cathedral. Our forebears did work hard to maintain and upkeep the Cathedral and they have passed it on to us. May we not neglect our responsibility to leave a goodly heritage for those who are to come after us.

Let us pray for the Dean, the Restoration Committee and all those who will be involved in this undertaking. Except the Lord builds the house their labour is in vain who built it.

Let us work together to restore/conserve the St.George’s Cathedral so we can celebrate the 200th Anniversary of its consecration and dedication in September, 2020 within its hallowed walls.

This is just a reminder that we are in the heart of the Hurricane season, traditionally September is the month that we have had the most ferocious storms and hurricanes. So continue to prepare to survive.

Let us pray for those who have been affected by the systems that have passed so far this year, especially those affected by Hurricane Harvey in Texas, USA.

Just a reminder to those parishes who have not sent in your offering for Codrington College as yet, please do so before the end of September, 2017.

Please continue to pray for The Rev’d Fr. Junior Ballantyne who continues to recuperate and for the Rev’d Mr. Kenwyck Lewis who is a patient at the Milton Cato Memorial Hospital, Kingstown, St. Vincent and the Grenadines.

As we begin the new school year 2017/2018 I take this opportunity to congratulate those who are entering a new school/education Institution: Primary, Secondary or Tertiary and those going to another grade, form, year. Those who have not been successful, do not take this as a measure of your worth but as an opportunity for a new beginning.

Continue to strive to do your best, consistently and to seek information,knowledge and advice from reliable sources, so you may make right choices for your own wellbeing and that of your family and society as a whole.

With every good wish and God’s blessings!